The nine-month operational data released last Friday as of the end of September focused on this:

The Group’s total revenue (excluding North America) increased by approximately 10%, which was due to an increase in sales volume of approximately 3.1% and an increase in average selling price for the year ended 30 September 2018. 6.9%.
The European market is the Group’s largest revenue market and accounts for approximately 40% of the Group’s revenue. The market continued to perform well and benefited from the significant appreciation of the euro against the Hong Kong dollar during the period. As a result, the revenue of the European market in Hong Kong during the period soared by more than 11% and is expected to contribute significantly to the Group’s profitability as the Group’s operating margin in the European region is relatively high.

Due to our sales and marketing efforts in the fierce market competition, the Greater China market continued to record a revenue growth of over 10% in Hong Kong dollars during the period. Despite the depreciation of the Australian dollar, the Australian and New Zealand markets recorded sales growth of approximately 5%, mainly due to the increase in orders for Chinese products and the rising demand from dental companies.

North American Market As MicroDental is still undergoing restructuring and integration, management believes that the independent presentation of operating data in the North American market will provide investors with a clearer understanding of the major markets of the Group. Sales and sales in the North American market declined slightly (less than 2% and 3% respectively) due to
(i) During the period, management focused on the ongoing restructuring and integration of MicroDental due to temporary changes in the closure of inefficient locations and the relocation of production facilities;
(ii) The management plans to focus on the higher price and profitable products of the MicroDental Group and gradually phase out the price and lower profit products.

And let’s look at the interim results data as of the end of June 2018: 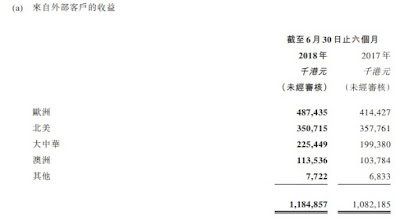 A little calculation, the data as of the end of June shows that North America’s income is reduced by 2%, which is almost the same as the 9-month data, but the income in the first half of North America is 15%, and the 9-month data is income. A 10% increase is a significant slowdown in revenue growth in July-September.

Excluding the North American market Modern Dental (03600) increased its total revenue by approximately 10% in the first nine months of September
If you don’t look at it carefully, you don’t know that the income in North America has fallen by 2%.

In addition, the nine-month data disclosure in the past two years includes the total number of sales and the average selling price. The total revenue can be calculated by simple calculation. However, this year only disclosed the number of sales and the average selling price outside North America, but there is no North American. The details, so it is impossible to calculate the total income, but can simply summarize the sales growth as of the end of September has slowed down, overall the growth is definitely lower than the 9.5% growth in the first half.

The management played a small trick on the disclosure and used a good presentation skill. I didn’t take the risk and chose to lose 1.5%.