In recent years, there have been more and more cases of privatization failures, starting from the failure of privatization of ZTE Aluminum (00098) last year, followed by New World China Department Store (00825), New City Development (01030), and Baosheng International (03813). And Guoco Group (00053) at the beginning of last month, among which I have participated in the development of Xingfa Aluminum, New World Department Store and New Town, and Baosheng International and Guohao have a high rate, so I did not participate at that time.

The privatization valuation of Sinotrans Shipping is equivalent to 0.75 times the price-to-book ratio and 50% premium to the stock price of 1.8 yuan before the announcement. Frankly speaking, this price is not attractive, especially if the company has a net cash of up to HK$1.3 per share. If the parent company can privatize it at 2.7 yuan, it is a big bargain. You can look at the reference data provided by the privatization circular in the privatization circular: 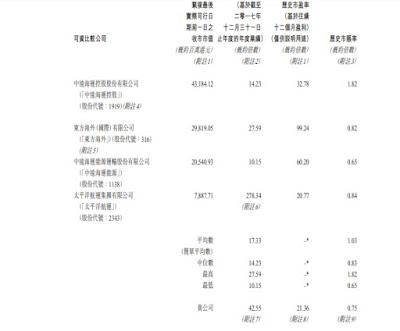 At present, the average P/B ratio of listed peers is 1.03 times, and the median is 0.83 times. However, the privatization price of Sinotrans Shipping is only 0.75 times the price-to-book ratio, which is far lower than the listed peer average, not to mention the assets of Sinotrans Shipping. Up to 1.3 yuan per share in net cash, the financial situation is the best among the listed peers, so this valuation is extremely low!

When the privatization was announced at the end of September, I personally felt that the privatization price was not attractive. However, the market sentiment was very poor. Therefore, I still feel that the opportunity is very high. Now that the market conditions have stabilized, the chances of vetoing the price are not low. Of course, as a state-owned enterprise, Sinotrans Shipping may have secretly contacted the friendly vote to support it, so I just went to Bo with a limited number of bets and would not re-note.

The current share price of Sinotrans Shipping has dropped slightly to 2.55 yuan, that is, if it is only now added to the short-selling, the potential maximum loss is about 6%, while the potential return is only about 21%, and the value rate is slightly lower than before.